US Marathon Championships – A good way to end the year! 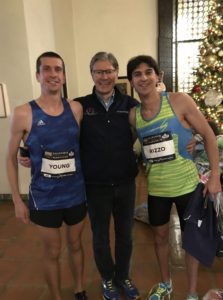 It’s good to end the year on a high note! At the 2017 US Marathon Championships in Sacramento last Sunday, ERM athletes TIM YOUNG and PATRICK RIZZO had exceptional races that made their agent and a host of other family members and supporters pleased and proud.

Despite the summer training hiccup that cost him the chance to toe the line at the New York City Marathon, TIM YOUNG has had a very solid and significant year. He has quietly put together great performances in all 3 of his major races in 2017 starting with the Houston Marathon in January where he finished 7th overall, 2nd American in horribly humid race conditions. In April, he had his second consecutive top 10 finish at the US Half Marathon Championships in Columbus in sultry, wet conditions with severe thunderstorms which halted the public race. And now, in the biggest race of his year, he finished 9th at the US Champs and gets the ‘A’ Trials standard in an official  time of 2:14:15, a 25 second PR. The thinking man’s runner, Tim ran his own race, but continued to mix it up with the leaders in Sacramento. Tip of the hat to both Tim for his performances in 2017 and his “ole coach,” ERM and Hansons-Brooks Distance Project athlete LUKE HUMPHREY, for making it happen. Tim’s accomplishments have not gone unnoticed.  In 2018, Tim should receive invites to run the NYC Half Marathon in March and then the Boston Marathon in April.

And then there’s the old dog PATRICK RIZZO. During his marathon build-up for the championship race at CIM, ‘Rizzo being Rizzo’ was not-so-quietly telling me and anyone else who was foolish enough to listen that he was in 2:15 shape and fully expected to “kill it” in Sacramento. As far back as early November, I preached caution and constantly reminded him that the goal was not to run 2:15, but to run sub 2:19 and get the qualifier for the 2020 US Olympic Trials — nothing more, nothing less. He’ll make me eat my words for saying this, but Patrick was magnificent in Sacramento. Officially, he finished 22nd in 2:17:13 — though he now claims (of course) “I could have run much faster.” His pacing was astoundingly consistent. For 10K, the half,  20 miles, and for the finish, his pace was 5:14, 5:14, 5:14, and 5:15 respectively. Pretty remarkable. More remarkable is that by hitting the ‘B’ standard he has qualified for the Olympic Trials marathon for the 4th time in his career. It’s a rare accomplishment. It solidifies his legacy as being a top-level elite performer at the most difficult of all racing distances over a significant period of time. A great achievement. Kudos, Rizzo. Depending on his recovery, Patrick still intends to run the Houston full in January. Talks are also under way for him to continue his sponsorship with Skechers Performance Athlete in 2018.

For more on Tim, Patrick and other athletes that ERM has the pleasure of reping, stay tuned.